Lying between latitudes 22° and 35°S, and longitudes 16° and 33°E, South Africa is the southernmost country in the continent of Africa, bordered in the south by 2,800 kilometres of coastline with the South Atlantic and Indian Oceans. To the north are the countries of Namibia, Botswana, and Zimbabwe; and to the east and northeast Mozambique and Swaziland. The small kingdom of Lesotho is surrounded by South Africa.

Much of the interior of South Africa is a vast, relatively flat plateau, surrounded by the Great Escarpment, the eastern and highest stretch of which is known as the Drakensberg, which includes Mafadi at 3,450 m (11,320 ft), the highest peak in South Africa. This sparsely-populated plateau is mostly dry scrubland (Great Karoo), increasingly drier towards the northwest along the Namib Desert.

North of Johannesburg the altitude drops and the well-watered and more highly-populated farmland of the Highveld becomes the lower-lying Bushveld, an area of mixed dry forest and wildlife. To the east the hot and dry Lowveld – including the Kruger National Park in the provinces of Limpopo and Mpumalanga – stretches towards the Indian Ocean where temperatures are high and humid, and subtropical agriculture is common. 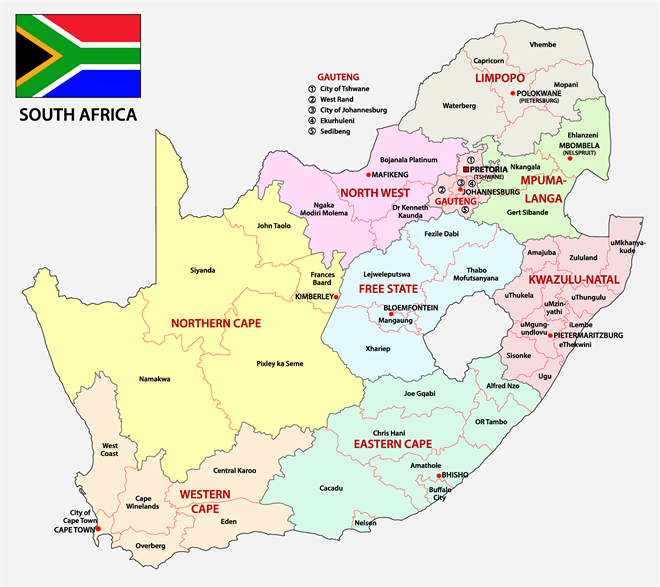 South Africa is a young, relatively stable democracy, dominated by one political party. Jacob Zuma became president in May 2009 following the ANC’s victory at the polls securing 65.9% of the popular vote. He came to power with the support of the tripartite alliance consisting of the South African Communist Party (SACP), the Congress of South African Trade Unions (COSATU) and the ANC.

In 2012, he was re-elected to a second five-year term as President of the ANC, beating his only rival and deputy, Kgalema Motlanthe, by a wide margin. Cyril Ramaphosa (a prominent figure in the South African business community and politician, activist and trade union leader) was elected as Deputy President of the ANC, succeeding Motlanthe who had declined a second term after losing to Zuma.

The most recent general election was held in May 2014 to elect a new National Assembly and new provincial legislatures in each province. It was the fifth election held in South Africa under conditions of universal adult suffrage since the end of the apartheid era and also the first held since the death of Nelson Mandela.

Human rights in South Africa are protected under its 1996 constitution, which has been hailed as one of the most progressive in the world as it also guarantees economic, social and cultural rights. The country has a strong commitment to human rights and has statutory oversight bodies such as the South African Human Rights Commission which protects the rights guaranteed under the Constitution.

South Africa is signatory to various international human rights instruments including the Universal Declaration of Human Rights; African Charter on Human and Peoples’ Rights; the International Covenant on Economic, Social and Cultural Rights; and the UN declaration on sexual orientation and gender identity.

Despite South Africa’s strong constitutional protections for human rights and its relative success at providing basic services, the government continues to struggle to meet demands for economic and social rights. Issues such as unemployment, corruption, and threats to freedom of expression remain a concern for many citizens. Excessive force by police is a persistent problem as well as concerns about the treatment of migrants, refugees, and asylum seekers, and resultant xenophobia violence.

South Africa continues to play an important but inconsistent role in advancing the rights of lesbian, gay, bisexual and transgender people.

Although there are still issues of unemployment, poverty and inequality, South Africa is the most sophisticated and developed economy in Africa and has some high-class companies in finance, real estate and business services, manufacturing and wholesale and retail trade. South Africa is the ‘gateway to Africa’ for investors due to its comparative sophistication, ease of doing business, continental expertise and ability to act as a base for critical services (e.g. auditing) for doing business on the rest of the continent.

Contact a Department for International Trade (DIT) South Africa export adviser at: https://www.contactus.trade.gov.uk/enquiry/topic for a free consultation if you are interested in exporting to South Africa.

Unemployment remains an immense challenge with an official figure of 26.7% but the real figure is probably nearer 40%. Two-thirds of all those unemployed are below the age of 35. The National Treasury’s forecasted growth rate falls short of the 6% rate analysts believe the country needs to tackle its stubbornly high unemployment levels.

South Africa’s business environment is challenging but still one of the best in the developing world. Problems include the skills deficit, poor labour relations, lack of electricity and corruption, but a well-developed transport infrastructure, sound macro conditions and robust financial and legal frameworks also exist.

South Africa’s overall performance in the World Economic Forum’s 2017-2018 Global Competitiveness Report Index decreased to 61st out of 137 (from 47th in 2016-2017), at a time of subdued GDP outlook, see: http://reports.weforum.org/global-competitiveness-index-2017-2018/countryeconomy-profiles/#economy=ZAF, and: http://www.doingbusiness.org/Rankings/south-africa.

The country has also improved in a range of other areas around starting a business, registering property, trading across borders, enforcing contracts and paying taxes.

There are still challenges for South Africa in attracting further investors, but these are not insurmountable, and many are already being addressed. As a developing country, South Africa will continue to face considerable socioeconomic challenges. However, the development of powerful interventions such as the National Development Plan and the New Growth Path provide a strong blueprint for tackling these issues.

The South African Government continues to focus on creating an enabling environment to facilitate investment, job creation and growth.

The top ten industries importing into South Africa are:

You can read more about what South Africa imports at World’s Top Exports: http://www.worldstopexports.com/south-africas-top-10-imports/.

Strengths of the South African market

Strengths of the South African market include:

The UK is a valued trading partner for South Africa, with annual bilateral trade worth just under £10 billion. The UK Department for International Trade (DIT) is focusing on high value and infrastructure opportunities, which are part of the South African Government’s development plan.

There are many UK investors in South Africa, including well-known companies such as Barclays, BAE Systems, BP, British Airways, Shell, Unilever, Virgin and Vodafone.

South African capital markets are top rated in the world, making it easy to raise financing. South Africa has a strong services sector. The government has set up an infrastructure upgrade programme to reduce infrastructure problems in energy, transport and water. The programme should help create short term employment and help enable the economy to grow in the longer term.

The top sectors include:

South Africa is ranked 74th out of 190 countries in the World Bank’s 2016 Ease of Doing Business index (the UK ranks 7th): http://www.doingbusiness.org/rankings.

Contact a DIT export adviser at: https://www.contactus.trade.gov.uk/enquiry/topic for a free consultation if you are interested in exporting to South Africa.